Skylanders: Infinity is the second game in my series. In this game, a brand new type of Skylander, called the Build Masters, are introduced. There will be 20 Build Masters, 24 Cores, 24 Builder Cores, 24 Ranged Cores, 24 Navigation Cores, 24 Explosive Cores, 24 Melee Cores, 24 Power Up Cores, 24 Musical Cores, and 24 Dual Cores.

It turns out all these limits in Skylands was the work of Kaos, who invented a crystal orb that creates all kinds of limits. However, an elite team of skylanders invaded his castle and destroyed the crystal. So Kaos quickly plotted his revenge. He grabbed his Evil Magic Wand to upset the base of Skylands and force the skylanders into another dimension, mainly to buy him some time to invent a new orb. Quickly! Find the skylanders, put them on the portal, and BOOM them back!

In Skylanders: ﻿Infinity,​ the Magic Items are even more useful! You now have the option of either using the weapon regularly, or replacing the Build Master's weapon with that Item and use it for 5 minutes. 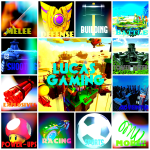